On Saturday, I went to a south Georgia festival known as the Big Pig Jig. I’d seen signs for it along the interstate for years—it’s in Vienna (pronounced Vie-anna, this being the Deep South), which is about an hour from where my parents live. But I’d never stopped in to check it out.

The big reason I made time to stop this year is that I have a story in the pipeline that’s about competition barbecue cooking teams, and I wanted to get a closer look at how those work for research purposes. This event is the state pork cook-off of Georgia (yes, such a designation exists), but as it turns out, my timing was way off. When I got there, the judging portion was underway, so I missed the cooking parts, and I didn’t even get to sample the results.

This year’s festival theme was “Gone With the Swine.” Porky’s speech bubble reads, “Frankly, my dear, I don’t give a ham!”

(Well, I could have, but I would’ve had to hang around for another two hours for that, and the “festival” part of the event was a great disappointment and certainly not worth that amount of time.)

What I ended up doing, since I was there, was some “local flavor” research instead. I took some pictures, as this post will attest, and I grabbed a copy of the event brochure for some more background information. I’m also going to look up the cooking teams whose signs I photographed and see if they’ll answer some specific questions. The competition part is the backdrop of the story, of course, since it’s a romance between members of rival teams, so the information will need to be right but not necessarily extremely detailed. 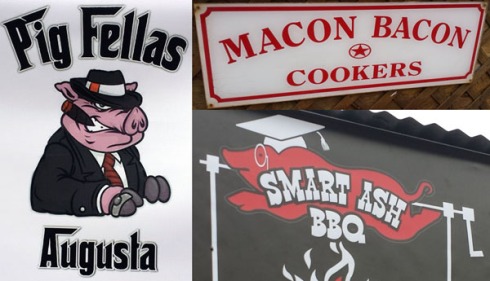 On the other hand, the winner at the Big Pig Jig gets to compete at Memphis in May, which is home to the World Championship Barbecue Cooking Contest. Maybe I should make plans to go in 2015 and finish up my research there. Mmmm, delicious, delicious research… 😉

Comments Off on This Little Pig Jig