Antonia Aquilante on Inspiration and Creating a World

Posted on December 28, 2015 | Comments Off on Antonia Aquilante on Inspiration and Creating a World

My guest today is Antonia Aquilante, here to talk about her Chronicles of Tournai series and its latest addition, The Artist’s Masquerade.

Thanks for having me on your blog today! I’m Antonia Aquilante, and my new book, The Artist’s Masquerade, is out today from Dreamspinner Press. The Artist’s Masquerade is the second book in the Chronicles of Tournai series, but it can be read as a standalone if you haven’t read the previous book, The Prince’s Consort, yet. It’s the story of Cathal, cousin to the prince and son of a duke, and Flavian, an artist on the run from his restrictive and dangerous homeland.

Inspiration can come from anywhere, often the strangest places, which happened to me when I was creating the world of Tournai. I sometimes dream things—characters, scenes, places—that become stories or elements of stories I write. Years ago I had a very vivid dream. It included a rather emotional scene between two people and a lot of details of the setting in which the scene took place. One element of the setting, which I knew, in the way you know stuff in dreams, was a room in a royal palace, was glass art. Intricate, delicate sculptures of fanciful subjects in vivid colors. I had no idea where the glass fit in to the story, or where it came from, when I woke, but I wrote down every detail of the dream I remembered in the notebook by my bed. Fast forward several years and I traveled to Italy. I saw beautiful glass pieces of all kinds made in Murano. I was struck by the beauty and the color and the craftsmanship of the pieces, some of which were incredibly old. A couple years after that, when I was crafting the world of Tournai, the dream and the memory of the Murano glass came back to me, and I knew where it fit. Tournai became famous for its glass, which was the most beautiful and highest quality in the world due to secrets of the process used in Tournai and perhaps to magic. Amory, one of the main characters of The Prince’s Consort, became the son of the foremost glassmaker in Tournai, and Flavian, a painter from far from Tournai, comes to appreciate the art of glassmaking. So inspiration can come from the oddest places, and I’m always happy when it does. 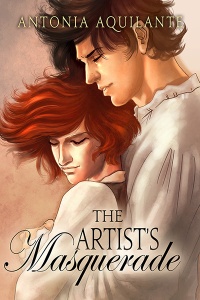 As the first-born son of the Duke of Tournai and cousin to the prince, Cathal has always tried to fulfill his duty to family and country, including following through with an arranged marriage to Velia, cousin to the emperor of Ardunn. But it’s Velia’s companion, Flavia, who fascinates Cathal. Cathal doesn’t know that Flavia is really Flavian, a man masquerading as a woman to escape Ardunn, a restrictive place in which Flavian’s preference for men is forbidden.

Even when Cathal discovers Flavian’s true gender, he cannot fight his attraction to him. Flavian is intrigued by Cathal, but Cathal is still betrothed to Velia, and Flavian worries Cathal is more taken with his feminine illusion than the man beneath it. While both men battle their longings for each other, spies from Ardunn infiltrate the capital, attempting to uncover Tournai’s weaknesses. They are also searching for Flavian, who possesses a magical Talent that allows him to see the truth of a person just by painting their portrait—a skill invaluable to Ardunn’s emperor.

Antonia Aquilante has been making up stories for as long as she can remember, and at the age of twelve, decided she would be a writer when she grew up. After many years and a few career detours, she has returned to that original plan. Her stories have changed over the years, but one thing has remained consistent – they all end in happily ever after.

She has a fondness for travel (and a long list of places she wants to visit and revisit), taking photos, family history, fabulous shoes, baking treats which she shares with friends and family, and of course reading. She usually has at least two books started at once and never goes anywhere without her Kindle. Though she is a convert to ebooks, she still loves paper books the best, and there are a couple thousand of them residing in her home with her.

Born and raised in New Jersey, she is living there again after years in Washington, DC, and North Carolina for school and work. She enjoys being back in the Garden State but admits to being tempted every so often to run away from home and live in Italy.