Anna Butler on Sex in a Non-AIDS World

My guest today is Anna Butler, here to talk about her new releases, The Gilded Scarab and Gyrfalcon, and how she approached writing in those worlds. Be sure to check out the giveaway options! 🙂

One of the more tricky questions I had to ask myself when writing both The Gilded Scarab and the Taking Shield series, was how to deal with sex.

Neither book has a lot of sex scenes (which some readers may deplore!), but the two or three that are there, are reasonably explicit. Neither book is contemporary. The Gilded Scarab is set in an alternate London of 1900, and the Shield series is set on a world halfway across the galaxy, thousands of years into an alternate future where Earth is dead and dark. AIDS doesn’t feature in either world.

I’m committed to what someone once called the struggle for health. General health, I mean. Better nutrition, good water, access to healthcare for all. And, of course, better sexual health. Shortly after AIDS became news, before therapies and drug regimens that make it manageable, I lost a neighbour to it. I watched his health decline, his weight drop away, his energies wane. It was a sad time. It brought home—hard—that the struggle for sexual health, everyone’s sexual health, was one in which we all have a stake.

When it came to writing my books, the issue for me was simple: do I have a moral obligation to write the sex scenes as if AIDS did indeed exist, and therefore not write anything that would undermine safe sex messages? Or write it and just sort of skate over the issues? After all, sex can be safe and safe can be sexy…

In the end, I don’t make mention of it.

I concluded that a novel isn’t a good way of proselytising and, if it doesn’t sound too pretentious, it isn’t my job as a writer to write role models but to write the characters as they unfold themselves to me. Being true to them, if you like. In neither Gilded Scarab nor Gyrfalcon is AIDS or safe sex an issue.

What’s more, I trust my readers to be grown ups and adult, and not need me to tell them, with big flashing warning lights, that the books aren’t real. After all, if I’m reading about a drug addict, I’m not going to take him or her as a role model for my own life. I recognise that their lives are within the constraints of the book. So I don’t expect any of you will be thinking “But why aren’t those two Victorian gentleman, or those two space pilots ten thousand years in the future, fishing about for the condoms? Maybe I can be that adventurous too…”

So, was I right? What do you think?

When Captain Rafe Lancaster is invalided out of the Britannic Imperium’s Aero Corps after crashing his aerofighter during the Second Boer War, his eyesight is damaged permanently, and his career as a fighter pilot is over. Returning to Londinium in late November 1899, he’s lost the skies he loved, has no place in a society ruled by an elite oligarchy of powerful Houses, and is hard up, homeless, and in desperate need of a new direction in life.

Everything changes when he buys a coffeehouse near the Britannic Imperium Museum in Bloomsbury, the haunt of Aegyptologists. For the first time in years, Rafe is free to be himself. In a city powered by luminiferous aether and phlogiston, and where powerful men use House assassins to target their rivals, Rafe must navigate dangerous politics, deal with a jealous and possessive ex-lover, learn to make the best coffee in Londinium, and fend off murder and kidnap attempts before he can find happiness with the man he loves.

Dreamspinner as an ebook and in paperback.

From an Amazon near you (Amazon.com and Amazon.co.uk links for starters)

All Romance as an ebook 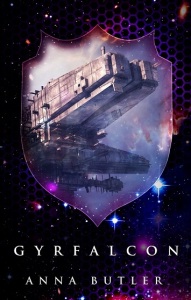 Earth’s last known colony, Albion, is fighting an alien enemy. In the first of the Taking Shield series, Shield Captain Bennet is dropped behind the lines to steal priceless intelligence. A dangerous job, and Bennet doesn’t need the distractions of changing relationships with his long-term partner, Joss, or with his father—or with Flynn, the new lover who will turn his world upside-down. He expects to risk his life. He expects the data will alter the course of the war. What he doesn’t expect is that it will change his life or that Flynn will be impossible to forget.

Gyrfalcon is available as an ebook at Wilde City Press

Comment here and get an entry in a rafflecopter to win an Amazon gift card (drawn when the blog tour is over at the end of March).

In addition, one commentator chosen at complete close-eyes-stick-a-pin-in-it random will get their choice of a little pack of Gilded Scarab or Gyrfalcon loot and a free copy of FlashWired (a gay mainstream sci-fi novella).

Anna Butler was a communications specialist for many years, working in UK government departments on everything from marketing employment schemes to running an internal TV service. She now spends her time indulging her love of old-school science fiction. She lives in the ethnic and cultural melting pot of East London with her husband and the Deputy Editor, aka Molly the cockapoo.