Suki Fleet on Guilt in Skeleton

Today my guest is Suki Fleet, with a discussion of guilt and responsibility as themes in her new book, Skeleton. There’s an excerpt, too! 🙂

Many thanks for having me on your blog today, Shae. My new release Skeleton came out on the 1st Oct.

Although Skeleton is what I’d consider a light sweet read it does tackle the subject of personal responsibility, and how hurting someone affects you even if you try to deny it—if you have a heart anyway 😉

This is one of the main themes of the story—how everyone does things they feel guilty about, like hurting someone or treating them badly (it’s human nature, we mess up) but ultimately it’s how we deal with our mistakes that is the important thing. Whether we bury them and struggle with our guilt or whether we are strong enough and have a big enough heart to do the right thing. And sometimes, of course, we need a shove in the right direction 😛

I hope readers can sympathize with Jan’s character. While he does have a skeleton in his closet (not literally), he also has a big heart.

Here is a short excerpt:

“Oh, I don’t know, I’m not sure it is,” Jan says, though he knows without a doubt Henry is right. He picks up their pace, leaving the figure behind them.

“If he’s still standing there, can we invite him home for a hot chocolate? Everyone likes hot chocolate,” Henry says as they walk slowly back home from the shop.

They turn into their street and see the figure is still standing on the corner, head bowed against the now freezing onslaught of rain.

Henry takes off at a run, and Jan doesn’t stop him. His chest feels tight. He’s nervous, and sure Matthew is going to think he’s a creep, even though he can’t think of a concrete reason why.

Matthew staggers as Henry launches himself at him, but then sinks down, kneeling in the dirt and wet of the pavement to hug the small boy.

As he gets closer, Jan can see Matthew’s shoulders trembling as though he’s crying. Jan’s not sure what to do. When he reaches the corner, he tentatively holds the umbrella over them, trying to find the right words to ask Matthew if he wants to come home with them to get dry. But before he can say anything, Henry takes Matthew’s hand, tugs him up, and leads him to their house.

Jan’s hands are shaking as he tries to fit the key in the lock. They are, all three of them, cold and wet. Matthew’s hair is plastered to his head, but even soaked and upset, Jan thinks he still looks heart-stoppingly beautiful.

Leaving them in the kitchen, Jan brings down all the warm towels he has from the airing cupboard. He throws one over Henry’s head and hands two to Matthew, who is slumped in a chair.

“Thank you,” Matthew says softly, balling the towels in his lap. His clothes are so drenched, they’re leaving puddles on the kitchen floor.

Jan goes back upstairs and searches through his wardrobe for a T-shirt and some sweatpants. Everything he has is huge, much too large for Matthew. He stands there for ages staring at his clothes. In the end he grabs a soft grey jersey and some grey sweatpants, if only because he thinks the color will suit the faint blush of Matthew’s skin.

“Here.” He holds his clothes out. Jan is fully aware he comes across as cold and standoffish when he’s nervous. “I’ll put your clothes in the tumble dryer. You can get changed in the bathroom at the top of the stairs… if you want…,” he continues hesitantly, sure Matthew probably doesn’t want to.

But Matthew takes them, his expression still slightly tearful, and makes his way upstairs.

“Henry, can you get me the hot chocolate and the milk please?” Jan asks, pulling a pan down from the rack.

The process of cooking anything is distracting, which is exactly what he needs right now.

Then with a groan he remembers the cake.

“How about I make some pancakes for tea?” he asks, knowing this suggestion is not going to go down well and inwardly wincing.

Even though he loves pancakes, Henry is not so easily duped. “You said we could make a cake for Matthew,” he says accusingly.

Jan sighs. Suddenly he feels very tired. Putting the pan on the cooker, he sinks down in front of Henry so they’re at the same level and rests his hands gently on Henry’s small shoulders. “I know I did. But as Matthew is here, and he’s a bit upset, I think it might make him feel a little uncomfortable. Do you understand?”

They look at each other a long while. Henry bites his lip. “Can I put sparkles on his pancake then? And a candle?”

“Well, if he wants a pancake, and you ask him first, then yes, you can put sparkles on it, but no candle, Henry, okay?” 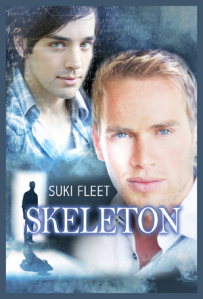 Jan has given up on love, at least the romantic kind. He loves his five-year-old son Henry more than anything.

But when Henry starts school, Jan is introduced to Matthew, a very sweet but shy young man who helps out in Henry’s class. Although he tries desperately to ignore his attraction, Jan finds himself falling for Matthew—he’s everything Jan needs.

But amid creepy silent phone calls and possible break-ins, things start to fall slowly apart for Jan. Matthew wants to trust Jan, but the skeleton Jan has been trying to keep buried in his closet and the guilt he feels threatens to destroy everything good in his life.

2 responses to “Suki Fleet on Guilt in Skeleton”