Guest Post: Jamie Fessenden on the Climb Up the Mountain

Jamie Fessenden is here today to talk about a cool mountain-climbing railway for the release of his new book, Murder on the Mountain.

Day Three of the Murder on the Mountain Blog Tour!

The Mount Washington Cog Railway always fascinated me as a child, but at about $65 a ticket (now—I don’t recall what it was at the time) it was out of my family’s price range. Alas, I still have yet to experience riding on the Cog. When my husband and I visited the area last December to research Murder on the Mountain, we stopped at the railway station, but the train wasn’t running.

First conceived of in 1852 by Sylvester Marsh, it took him six years to get permission to build the railway, largely putting up his own funds. But the Civil War intervened, and construction didn’t begin until 1866. By 1868, paying customers were riding the train, though it was still incomplete. It finally reached the summit in 1869.

It is the world’s first mountain-climbing cog railway, and the second steepest in the world, with a maximum grade of 37.41%. In order to deal with the steep grade of the tracks, it uses a cog (pinion) in the center of the engine, fit into a rack that runs the length of the track. It originally had boilers which were vertical, mounted on trunnions to keep them upright as the grade changed. Those have since been replaced by horizontal boilers, but as you can see in the photo, they’re positioned an angle so they remain relatively flat during the climb.

At one time, workers on the mountain used to ride “devil’s shingles” down the tracks to make the trip quickly. These were just flat sleds attached to the tracks, big enough for just one person. They plummeted down the mountain at about 60mph, reaching the bottom in about 15 minutes. The record was two minutes and forty-five seconds! Devil’s shingles were eventually banned, when someone accidentally killed himself on one.

For the next four weeks, Murder on the Mountain will be touring the blogs of several MM Romance authors. If you leave an email address in the comments or email me at jamesfessenden@hotmail.com, you’ll be entered into a drawing for either a free copy of Murder on the Mountain or a $40 gift certificate to Dreamspinner Press! 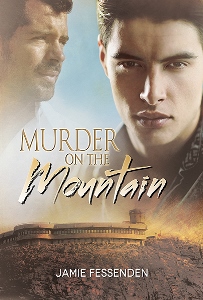 When Jesse Morales, a recent college grad who aspires to be a mystery writer, volunteers to work on the summit of Mt. Washington for a week, he expects to work hard. What he doesn’t expect is to find a corpse in the fog, lying among the rocks, his head crushed. The dead man turns out to be a young tourist named Stuart Warren, who strayed from his friends while visiting the mountain.

Kyle Dubois, a widowed state police detective, is called to the scene in the middle of the night, along with his partner, Wesley Roberts. Kyle and Jesse are instantly drawn to one another, except Jesse’s fascination with murder mysteries makes it difficult for Kyle to take the young man seriously. But Jesse finds a way to make himself invaluable to the detective by checking into the hotel where the victim’s friends and family are staying and infiltrating their circle. Soon, he is learning things that could very well solve the case—or get him killed.

8 responses to “Guest Post: Jamie Fessenden on the Climb Up the Mountain”