I took last weekend off from writing and related tasks, and I refuse to let myself feel guilty about it. For one thing, my level of guilt for how messy the apartment had gotten would have far outweighed the no-writing guilt. Sister and I have been so busy the past few months that housekeeping has been a bare minimum. Things have piled up around the edges, and so last weekend, we tackled it. 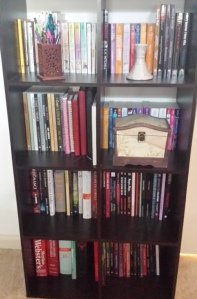 I assembled a new bookshelf and filled it with my writing books and all of my print romance books (including my own). I put away a stack of linens that had been waiting to be folded for weeks. I finished emptying my overnight bag from my last trip and put it away. I did ALL THE LAUNDRY. I put the last of my cold-weather clothes in storage and got a box of long-term storage stuff ready to move to our storage unit. I filled a box of clothes, shoes, and other extras to take to the Lost-N-Found Youth thrift shop. I bagged up trash and sorted receipts for shredding. I ran the dishwasher and hung curtains in my bedroom.

I also sent emails requesting quotes for a house cleaner, because GAH.

I started a new side project recently (job no. 3, for those counting) that will probably take about the same amount of time as it would for me to keep up with my share of all the necessary housecleaning. But it’s something I’ll enjoy doing. So I’m going to use part of that money to pay a cleaning service so I won’t have to do as much of it. I consider that a very fair trade-off.

(Truthfully, we could afford to hire someone anyway, but having the extra money and the commensurate less time makes the decision much easier.)

Anyway. For a while many years ago, I worked as a house cleaner for a family of three. I got paid much less than I should have (even by 25-years-ago standards) to clean the kitchen and two bathrooms, change beds in two rooms, do most of the laundry, and vacuum everything. It was HARD. I mean, anyone who’s done housework knows that, but most people don’t do it all at once. I understand that housecleaning services are a job like any other, with good and bad aspects, but I have all the respect for anyone who cleans a whole house willingly, and especially for those who actually seem to enjoy it.

Right now, we’re planning to get a one-time, top-to-bottom, deep cleaning, followed by either monthly or bimonthly regular cleaning. We aren’t terribly messy, and we generally clean up after ourselves, but we both hate doing anything beyond surface cleaning. (Except that my sister loves to vacuum. Weirdo. Though if ^that guy^ were doing the vacuuming, I’m sure she’d be happy to just sit back and watch.) We’ll be getting the kitchen and bathrooms scrubbed down once or twice a month, plus dusting and other general stuff.

And then when I have writer’s block, I’ll have to come up with some other way to procrastinate. 😉

This entry was posted in musings. Bookmark the permalink.