Today’s guest is Helen Pattskyn, here to talk about her latest release, Hanging by the Moment. Be sure to read to the end, because she’s got a giveaway, too!

First and foremost, I want say a huge thank you to my lovely host, Shae Connor. It’s been a lot of fun getting to visit the blogs of some of my favorite authors, most of whom are people I actually know to one extent or another in real life (or at least through Facebook, Twitter, and email!) One of the best things about getting involved in writing m/m romance has been getting to meet so many awesome people.

On September 6, my third novel, Hanging by the Moment, came out from Dreamspinner Press. There are a lot of things about this book that I love. I love that Pasha Batalov is Russian, just like me. I love that he’s not a stud with six pack abs and that he’s more than a little body conscious of his flab. Just like me. I love that a really handsome man falls in love with him, because like a lot of the amazing people I’ve dated, Daniel doesn’t give a rat’s behind what’s on the outside. What matters to him is the kind of person Pasha is on the inside.

I love it when the good guys win, especially in romance. Of course that doesn’t mean Daniel and Pasha will have an easy road to travel—and I love that too, but because I love a little (okay, maybe a lot) or angst in my romance.

But one of the things I had the most fun with in Hanging by the Moment was the food, because like me, Pasha loves to cook. He several traditional Russian and Greek dishes throughout the novel—he and father are co-owners of a little Greek style diner. Pasha also does some “creative cooking,” experimenting with new combinations, and of course with some healthier food options because after he meets Daniel, he’s more determined than ever to shed a few pounds. He’s also trying to revamp the struggling restaurant by offering his customers something different.

One of the different things he makes is almond-encrusted pork chops, served with sliced Fiji apples—it’s kind of a higher end take on the old fashioned idea of pork chops and applesauce.

Almonds are incredibly good for you and they taste super awesome as a “breading” for pork chops. It’s also super easy to make.  All you need is your choice of chops (center cut is best, but whatever’s on sale works find!) a handful or so of crushed almonds (you can crush them yourself or buy them crushed in the baking aisle—a 4 ounce package should be fine for one chop), a few spices, and of course apples. I happen to really love Fiji and gala apples, so invariably those are the kinds we have in the house.

I don’t bother using egg, I just dredge the chops through the crushed nuts and then sprinkle them with a little garlic powder and salt. The chops go in a pan with some olive oil (olive oil really is my favorite oil for cooking) and each side gets cooked for 3 or 4 minutes, depending on how thick the chops are.

The following excerpt also about food and cooking. Before this scene, Daniel came into the restaurant see Pasha, but because Pasha is so far in the closet, he choked up and wouldn’t even go over and say “hi.” He knows he blew his chances with Daniel, so when the chance to hook up with another guy came along, Pasha jumped on it—and kind of made an ass of himself in the process:

AFTER several hours of tossing and turning, Pasha finally gave up on sleep and got out of bed. He couldn’t get his mind off Daniel. More than anything, he wished he could go back in time somehow and fix things. If he could change the past, he would run out the back door, catch Daniel in the lot, and beg him for another chance. Or better yet, he wouldn’t act like an ass in the first place. He would quietly tell Daniel that he was in the closet and ask him if they could meet somewhere later. Dinner. Drinks. Whatever Daniel wanted would be fine with him.

But there was no going back and the chances of ever seeing Daniel again were slim to none. Even if he did, what would he say? Sorry I was such a jerk, you wanna try again? I promise not to be a total ass hat this time? Yeah, right.

Miserable to the core, Pasha started rooting through the kitchen cupboards as quietly as he could. There was nothing he could do about having screwed up with Daniel, but he could at least try to make it up to Amy for being such a jerk in front of her friends. Not that he would mind hooking up with Brett again, but maybe next time they should do it somewhere other than someone else’s bathroom. And maybe Amy really is wrong about Brett. Maybe he hasn’t found the right guy yet. It was worth a shot to try—wasn’t it?

By the time five o’clock rolled around, the kitchen was toasty warm and smelled of vanilla and brown sugar, and Pasha was humming along with Kylie Minogue on the radio.

“What the hell are you doing?” His father’s voice rose above Kylie’s.

Pasha scrambled to turn down the radio. “Sorry. Did I wake you up?”

“No.” But he was still scowling. He stalked over to the radio and turned it off. “It’s five o’clock in morning. What are you doing up? And what is that?” He scowled down at the nine-by-thirteen-inch pan Pasha had just pulled out of the oven.

“What the fuck is blondie?”

“They’re kind of like brownies,” Pasha explained. The ones he’d made had walnuts, pecans, and swirls of homemade caramel. Pasha had even sacrificed some of his Ghirardelli white chocolate chips because white chocolate was Amy’s favorite. He owed her big time, and he knew it.

Dad, however, didn’t look impressed. “Last thing we need in this house is more shit.”

The words stung. Pasha told himself all father really meant was “junk food,” but that didn’t make his actual words hurt any less. “I didn’t make them for you. I made them for Amy.” He’d planned on cutting a few pieces for his father, but if Dad was going to act like that, why bother?

“Why you cooking for her?” Ivan wanted to know.

“What difference does it make to you why I do anything?” He turned and refilled his coffee cup, then poured a cup for his dad, too.

Fuck. Pasha wiped his hands off on the dish towel. How had Dad figured it out? Unless Samara—

Pasha frowned. “I know she has a boyfriend.” Everyone did. “What are…? Wait. You think me—and Amy? Dad, honest, we’re just friends.”

Ivan gave him a long measured look. “Okay. So maybe you’re ‘just friends.’” He didn’t sound like he believed it. “I know you’re good boy, Pasha. I know you don’t mean to do wrong things. But maybe Amy’s drook—what’s his name? Leon? Maybe this Leon no like her having….” He hesitated, as if searching for the right word. Failing to find it in English, he said in Russian, “Bleezkiy drook.” A male friend, someone close, but not romantic. “Maybe he thinks you trying to steal her, huh? Why cause trouble between them? Let Amy be. It’s no good to go sniffing around skirt of another man’s woman.”

“Jesus Christ, Dad, do you realize what you just said?”

“Not girl friends maybe, but you’re man, Pasha. Men and women aren’t friends like that. Only reason man hangs out with woman is because he wants her in his bed.”

“Seriously, Dad? That’s what you think of me?”

“You’ve never even met him!”

“You think I let your mother run around with other men?”

Pasha’s jaw tightened. “I really wouldn’t know. Excuse me. I need to take my shower.”

Ivan grabbed his arm as he tried to pass—Pasha yanked it back.

“You listen to me,” the old man seethed. “You leave those at home. Or how about you give them to Nadia when she comes in for breakfast?” he suggested, brightening some. “Kids—”

“Nyet. I made this for Amy and she’s who I’m giving them to. I don’t know why you’re making such a big deal out of nothing—”

“If it’s nothing, how come you don’t want to give this to your sister for kids?”

“Because I didn’t make it for them!” Why did everything always have to be such a battle between him and his dad?

“You think you know everything, don’t you? Well you don’t know nothing!”

Pasha took a deep breath and counted to ten and then back down again. It only helped a little. 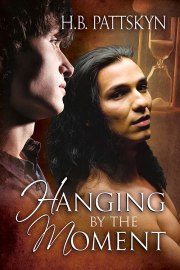 Pasha Batalov has lived his whole life doing what a good son is expected to do. He dropped out of school to help run the failing family restaurant, and ever since he’s put up with his difficult business partner, who also happens to be his father. And, of course, he keeps his sexual orientation a secret from his conservative, Russian family. After being closeted costs him his first serious relationship, Pasha resigns himself to one-night stands and loneliness.

But a chance encounter with lost delivery-truck driver, Daniel Englewood, has Pasha questioning all of his assumptions about life. Daniel is sweet, funny, smart, drop-dead gorgeous—and for the last six years, he’s been living with HIV. Pasha worries that he won’t be strong enough to help Daniel if HIV turns to AIDS, but he can’t walk away from their deepening attraction. He also doesn’t know if he can be strong enough to face the hardest task that a relationship with Daniel demands: coming out to his family and friends, and risking losing everything else he holds dear.

And of course since this is a part of a virtual book launch party, there are party favors! Or at least a prize at the end of the blog tour. Between now and October 14, I’m visiting a bunch of my friends’ blogs; if you leave a comment here (and include your contact info) you’ll be entered to win a pretty cool prize: a sighed paperback copy of Hanging by the Moment as well as a goody bag of awesome swag.

And anyone who signs up for my newsletter will also be entered to win a signed paperback copy of the book in October.  (I might share my blondie recipe in October’s newsletter, too  🙂

This entry was posted in guest blog, helen pattskyn. Bookmark the permalink.

3 responses to “Guest Blog: Helen Pattskyn Hangs by a Moment”