Today’s guest blogger is Posy Roberts, telling us about how she approached the development of her characters for her latest release, Spark.

Last year, as I prepared for a summer of writing, I decided to create what amounted to be a character board. It was like a storyboard but about characters instead of plot. I already knew what I was starting in June was going be my North Star trilogy, because the story couldn’t be told in just one book. That meant a lot of words. It also meant I’d probably need something to help me quickly remember that Hugo Thorson was internally motivated, while Kevin Magnus was externally motivated. That impacted how they interacted throughout the entire trilogy, and if I forgot those details, I could have had a huge mess to clean up.

Spark is the first book in the North Star trilogy. In it, I follow Hugo and Kevin during their junior year of high school and then again when they meet years later. As they aged, their external appearance changed, and I found it really helpful to have photos of both young and older versions of Kevin and Hugo looking back at me from this character board. Some mornings I’d just stare at one guy so I could get inside his head.

On the photos, I printed their first and last names. I’m sure you’re thinking, “Dur! How could you forget their names?” First names, not so much, but OMG, did I ever mess up their last names. Just ask my pre-readers. Okay, I occasionally messed up their first names too. As I went to edit, I’d only have to glance up and there was Hugo’s name in bold letters on the photos to help me keep things straight.

Personality traits are very hard to change. You can’t make an introverted kid into a social butterfly. They can learn how to be more outgoing in social situations, but at their core, they are still introverts who find energy from being alone. Those traits, or temperament characteristics, are some of the words I included on my character board. I wrote traits that would help me along, so I could make sure Hugo remained that outgoing, fun loving guy and so Kevin would still be reserved even when he took charge. 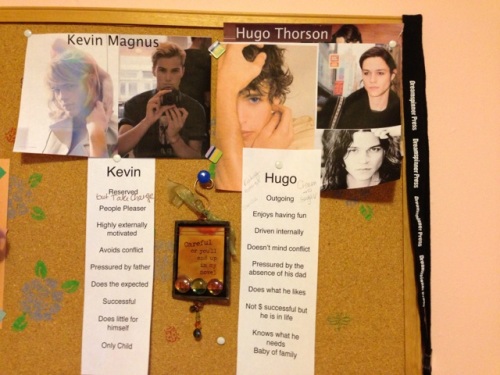 There were days when I’d be at a loss about what to write, but then I’d peek over the top of my computer screen and look into Hugo’s gorgeous blue eyes or into Kevin’s smoldering grey, and I’d find my inspiration. I’d look at that list of characteristics and ask myself, “How would Hugo handle this moment?” Sometimes it was just what I had planned in my head, but other times, my initial thoughts were shot to hell and I realized Hugo would go and do something so much different than what I’d laid out.

I think what I liked most about my character board being up and on an actual wall, rather than stuck in a computer somewhere, was that it was ever present. I never had to hunt in a journal to be reminded of their core make-up, and that made it easier to write these men. For when I was away from my desk, I always had my Pinterest or Tumblr (NSFW), where nearly all my pictures of Hugo and Kevin were being shared with the world.

The list of words was far from exhaustive and they weren’t all about personality. I wrote what kind of coffee Hugo liked, for example. I also included that Kevin was an only child and Hugo was the baby of the family. I know this helped me keep my guys more consistent over three books than if I hadn’t had that visual. Having the character board accessible all time truly helped me write, and I’m sure I’ll do this again, even for smaller works.

Spark is about second chances at love. Who wouldn’t want that with the right man? 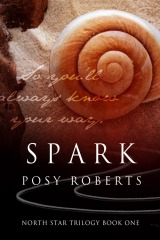 In their small-town high school, Hugo and Kevin became closeted lovers who kept their secret even from parents. Hugo didn’t want to disappoint his terminally ill father, and Kevin’s controlling father would never tolerate a bisexual son. When college took them in different directions, they promised to reunite, but that didn’t happen for seventeen years.

By the time they meet again, Hugo has become an out-and-proud actor and director who occasionally performs in drag—a secret that has cost him in past relationships. Kevin, still closeted, has followed his father’s path and now, in the shadow of divorce, is striving to be a better father to his own children.

When Hugo and Kevin meet by chance at a party, the spark of attraction reignites, as does their genuine friendship. Rekindling a romance may mean Hugo must compromise the openness he values, but Kevin will need a patient partner as he adapts to living outside the closet. With such different lifestyles, the odds seem stacked against them, and Hugo fears that if his secret comes to light, it may drive Kevin away completely.

Here’s an excerpt from Chapter 3 of Spark. You can read Chapter 1 here.

Kevin’s hair was much shorter than it had been when they first met, now cropped along the sides and back with thick, long strands pushed back off his forehead. It was still the same golden-blond that had attracted Hugo so many years ago when they introduced themselves on Kevin’s first day working at Hormel. When Kevin had stepped into the room where a nearly sixteen-year-old Hugo was just starting to hand-wash the delicate blown-glass vessels used in research and taste testing, Hugo almost broke a large beaker which probably cost more than he made in a week.

Nineteen years prior, Kevin had silky blond hair just skimming past his shoulders, which he had pulled back to look more office appropriate, but wispy bangs escaped the binding, framing his eyes and dark-blond brows. His eyes were gray and piercing, ringed in blue so dark it looked like the color of the sky at dusk right before it turned black. He was beautiful, but not classically so. His lips were too full for a man’s face, too full for him to not be called pretty, at least. But his long nose, high cheekbones, and strong jaw gave his face masculinity, even if all those distinctive lines did were draw Hugo’s focus right back to those pink, parted lips.

“Mr. Harrisburg’s office?” The blond boy’s voice rumbled deep from within his chest, causing Hugo’s breath to stop as he thumbed over his shoulder toward his boss’s door. He watched as the boy crossed the room, dropped a stack of letters into the wooden box attached to the wall, and pivoted to leave. Right at the doorway, he turned and smiled, pink mouth giving way to straight, white teeth. “I’m Kevin, by the way. Kevin Magnus.”

“Yeah. First day. My dad started working here a few months ago, but my mom and I just moved down from Fargo now that school’s finally over. I’m gonna be a junior.” He seemed nervous, talking quickly. “A bit pathetic, but I heard about this job through my dad. So here I am.”

“Well, hi. My dad helped me get this job.” Hugo shrugged to show Kevin he didn’t think he was pathetic for having help finding a job at all. “I’m going to be a junior this year too. I basically wash dishes and get things ready for everyone who works in the lab.” Hugo gestured to the rolling cart in the hallway and asked, “Mailroom?”

“Yep. Dad thought it would be good for me to start at the bottom so I’d work hard to never be here again. Whatever.” Kevin rolled his eyes and gestured toward the door. “I’d better get back to work.”

Posy Roberts lives in the land of 10,000 lakes (plus a few thousand more). But even with more shoreline than California, Florida, and Hawaii combined, Minnesota has snow—lots of it—and the six months of winter makes us “hearty folk,” or so the locals say. The rest of the year is heat and humidity with a little bit of cool weather we call spring and autumn, which lasts about a week.

She loves a clean house, even if she can’t keep up with her daughter’s messes, and prefers foods that are enriched with meat, noodles, and cheese, or as we call it in Minnesota, hotdish. She also loves people, even though she has to spend considerable amounts of time away from them after helping to solve their interpersonal problems at her day job.

Posy is married to a wonderful man who makes sure she eats while she documents the lives of her characters. She also has a remarkable daughter who helps her come up with character names. When she’s not writing, she enjoys karaoke, hiking, and singing spontaneously about the mundane, just to make normal seem more interesting.