Today, after MUCH too long a break between releases, is the day we welcome En Fuego into the world! *throws confetti*

Before anything else, as I am scatterbrained and totally neglected to include this in the story file, I need to send out great big HUGE thanks to my beta readers, D.M. and Kat. In particular, thanks to Kat for sharing parts of her Puerto Rican heritage to help make Marsh’s real. Love you both to bits. ❤ 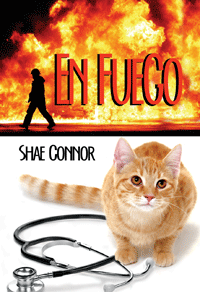 From Dreamspinner Press, En Fuego is a novella about a firefighter, a veterinarian, and the cat who brings them together. Here’s the story blurb:

Marshall Ramirez isn’t looking to fall in love, but from the moment firefighter Brad Flannery walks through the doors of Marsh’s veterinary clinic, he’s smitten. Marsh treats Fuego, the cat Brad rescued from a house fire, and convinces Brad to take her on as a foster—along with the three kittens Marsh helps her deliver. What Marsh really wants, though, is for Brad to keep him too.

An excerpt is at the bottom of this post (behind the cut), and I’ll be doing a small blog tour for the new release, so look for me the next few days…

And, of course, I’m giving away a copy of En Fuego! Just comment on this post, and I’ll pick a winner to receive an ebook (via the Dreamspinner Press website), as well as some story-related swag by mail. Be sure your email is included so I can contact you if you win!

At the words from one of his techs, Marshall’s head popped up from where he was signing off on his last patient, a Lhasa Apso with his third eye infection in a year. Marsh wasn’t too happy about sending the dog home with his apparently less-than-attentive owners, but he didn’t have another option.

An ambulance showing up took precedence over paperwork, considering they were an animal hospital, not a human one. Animals didn’t get ambulance rides much, which automatically made whatever was going on way more interesting than the invoicing he’d planned.

Setting aside the forms for the receptionist to handle, Marsh started toward the door to see what emergency was coming in. After he’d taken just a few steps, the door burst open to admit a firefighter still wearing his full turnout gear and, as Marsh found out when he got close enough for a good whiff, reeking of smoke. The man’s body filled the doorway, all broad shoulders and thick legs, and it took Marsh a moment to draw himself away from the surprise of the other man’s entry to realize he held a small cat in his arms.

The man’s eyes lifted from the animal he cradled so gently against his body, and Marshall almost stumbled when he saw their deep blue.

I just pulled her out of a burning house,” the man said. “I need to see the doctor.”

Marsh forced himself back into motion, crossing the few feet between them so he could touch the man’s shoulder. From closer up, he saw that the whites of the man’s eyes were bloodshot and his eyelids were drooping, most likely from exhaustion. He also realized that, despite the illusion of size his build gave, the man was a few inches shorter than him. Then again, at six four, nearly everyone was shorter than him. It was just his slim physique that made him seem smaller.

“I’m Dr. Ramirez.” Marsh kept his voice low and soothing and used the light pressure of his hand to direct the man toward the emergency examination room off to one side. “Let’s get her in here and see how she’s doing, okay?”

The man held his upper body motionless as he followed Marsh’s lead, arms still curled around his furry companion. Marsh held the door and let the man precede him into the room before stepping around him.

“If you’ll set her up on the table, sir, I’ll take a look.” The man looked up again, unsure, and Marsh smiled. “It’s fine, sir. You can stay right here with her.”

The man’s head jerked up and down a couple of times before he oh-so-slowly and gently eased the cat away from his body and settled her onto the table. She began to meow in protest, and Marsh reached to lay his hand across her back to settle her, but he found his hand lying atop the other man’s instead. Their eyes met again, and Marsh chuckled as he drew his hand away.

“Sorry. I usually at least ask for someone’s name before I start holding hands.”

That broke through the spell that had kept the other man silent. He gave a small smile. “Brad. Brad Flannery.” He glanced down. “She’s a stray. Heard her crying under the house and went in after her. But the owners don’t have a cat. So I brought her in. Couldn’t just leave her out there like that.”

Marsh listened to Brad’s scattershot report while he checked the cat over. Definitely a female, she looked mostly okay, with just a few slight burned spots and some smoke residue around her nostrils and mouth. Light smoke inhalation, and a couple of the burns might be bad enough to need bandaging.

He ran his hands over her body, paused, and did it again, then looked up at Brad.

“Well, Mr. Flannery. You might be looking at some grandkittens arriving very soon.”