Posted on March 2, 2012 | Comments Off on Friday Feedbag: Penzeys Spices 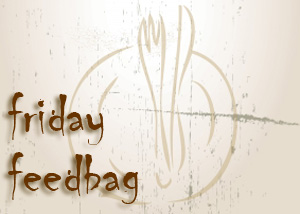 I haven’t done a Friday food post in a while, so I thought I’d share one I wrote for Cup o’Porn a while back about Penzeys. 🙂

I love to cook. I don’t do more than just throw something together for dinner all that often, but when I set aside the time to put together a real meal, I’m in heaven. Cooking is great for instant feedback (something I’m sure fellow authors can understand!), and it feels great when anyone requests that you make something specific for them. A family friend wants me to make French onion soup every time we get together, which is fine with me, because I love it too! 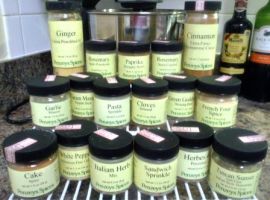 I tend to be a “kitchen sink” kind of cook, modifying recipes and adding in extras left and right. That means I need to keep my pantry well stocked, especially my spice rack. One of my favorite cooking-related discoveries in recent years has been Penzeys Spices.

My first introduction to Penzeys came through a Chicago friend about six or seven years ago, and I’ve been ordering from them regularly ever since. They offer pretty much every spice, herb, and blend you can think of, plus a lot of their own mixes, and their prices are unbelievably good. You can order tiny amounts of things you don’t use regularly, all the way up to big jars or bags of your favorites.

My primary recommendation for first-time Penzeys buyers is cinnamon. I can’t handle hot spices, like ground chili peppers, but I love rich, strong cinnamon, and Penzeys stocks some of the best. The cinnamon you usually find in stores is actually cassia, rather than the true Ceylon cinnamon, and the flavors are noticeably different. Cassia cinnamon is grown mostly in Southeast Asia, and the best I’ve tasted is Penzeys’ Vietnamese Extra Fancy Cinnamon, which I find sweet enough on its own for one of my favorites, cinnamon toast. Penzeys also sells Ceylon cinnamon, which is less sweet than cassia, and several different cinnamon blends.

Some of my other Penzeys favorites are paprika, minced garlic, rosemary, ginger, and peppercorns, but they’re also great for trying out new-to-you spices and mixes. The prices are low, and every online order comes with a free, full-size sample, too. Since I try to keep my sodium low, I particularly like that they have so many salt-free blends.

As a bonus, while looking up links for this post, I discovered that Penzeys recently opened a retail store in Atlanta. I’ll definitely be heading over there soon, but I’ll have to be careful, or I may never come back out again!

This entry was posted in friday feedbag. Bookmark the permalink.